Disclaimer: This post may be too long for your typical blog. Have no fear, there’s lots of pictures!

Over the Easter break (note: according to the western calendar, not the eastern orthodox, as we discovered are different) my friend Lisa and I went to Ethiopia for just over a week. Wanting to take advantage of my visa run, and avoid extended African overland travel at all costs, I looked for cheap flights and decided why not Ethiopia! 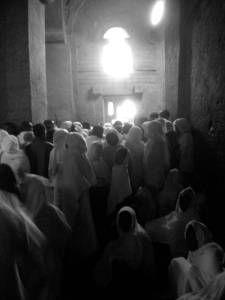 Inside one of Lalibela’s Orthodox churches on a Sunday

For years I have heard other travelers rave about the country – the food, the landscape, the people – and thought that I may as well check it out for myself. Since it is a pretty huge country and I only had ten days, we decided to do the northern “tourist” circuit.

We started our jaunt in Lalibela, known for its rock-hewn churches. Before I got there, I had no idea what a “monolith” building was. I definitely learned. This small town, perched on a steep hillside, houses eleven churches carved out of the hillside. As our guide put it, “The outside they carved from the top down, and the inside from the bottom up.” Built in the 1100s by King Lalibela, they literally made entire hills out of the rubble carved away making these beautiful, underground churches.

In addition to the impressive rock churches, Lalibela is also home to some of the most impressive views I have seen. I have never seen another landscape where plate tectonics are so clearly in action. The huge, stark mountain ridges and plateaus were thrown into stark relief by the browns and tans of the dry season. It was a harsh landscape, but breathtaking.

Church of Saint Giyorgis, carved out of a single massive rock

St. Giyorgis from above – aka ground level

A priest guarding the church

Walking down into the churches 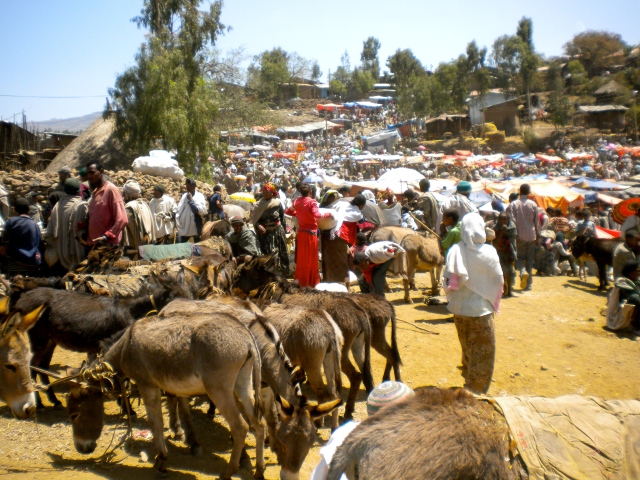 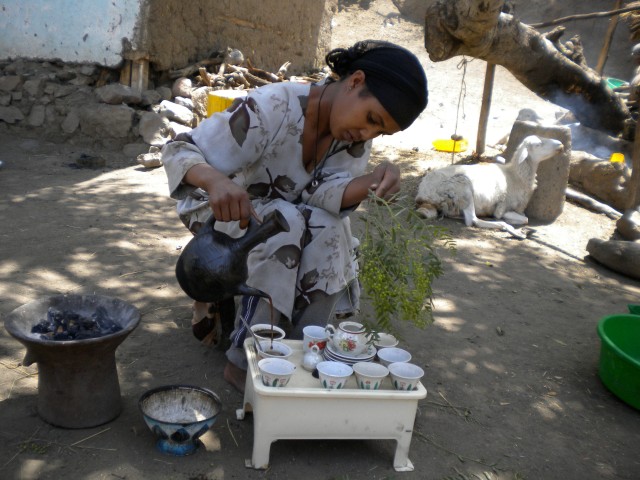 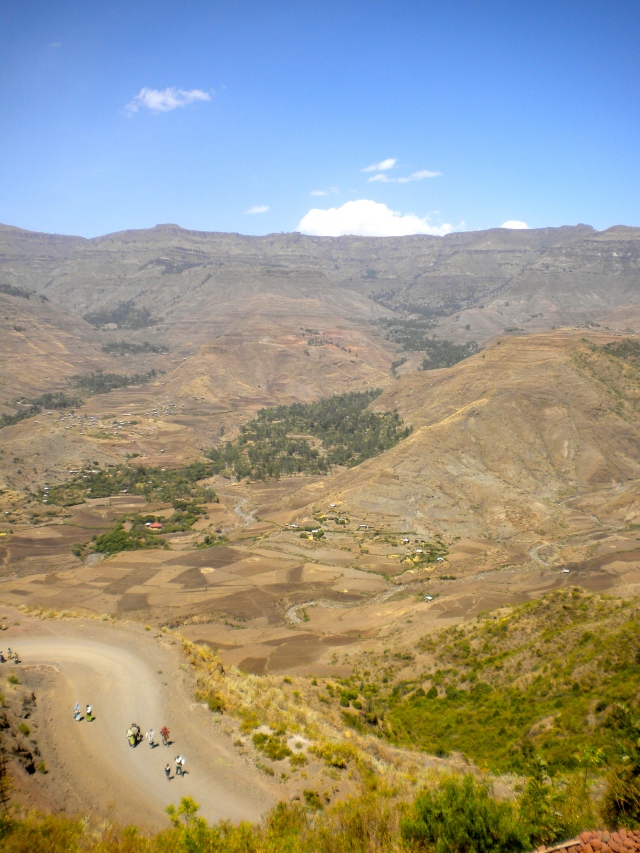 Next up, we headed to Gonder, the “Camelot of Africa.” Sitting at the foot of the Simien Mountains, Gonder’s royal enclosure is the main attraction, with a number of castles built in the 1600s by Emperor Fasilides and his offspring. In addition to making me feel like I was ancient royalty, the royal enclosure proved a wonderful spot to while away an afternoon, reading on the grass and pondering the massive stone buildings.

Gonder is also a lively college town, overflowing with street-side cafes – a holdover from the brief period of Italian colonialism – juice bars, and deliciously cheap injera restaurants. Of course we couldn’t spend a day there without a brief jaunt to the foothills of the Simien Mountains, which just about every boy on the street between the ages of 18 and 30 tried to get us to sign up for. Despite all the hassle, it was worth it. 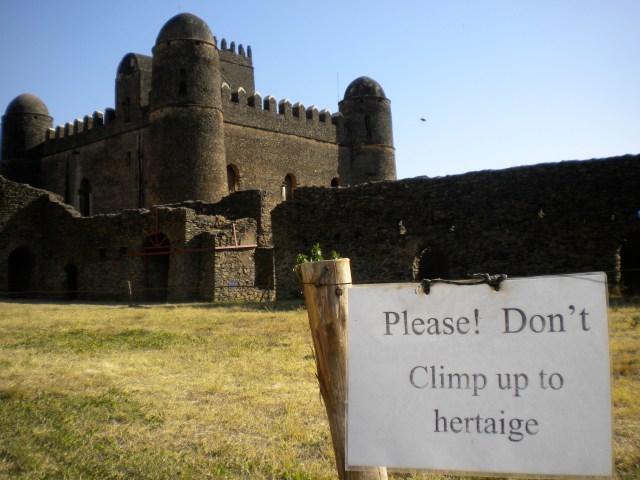 The Simiens – and my feet

The last stop was Bahir Dar, the city on the Lake. Lake Tana, the source of the Blue Nile, provides Bahir Dar with a tropical flair – palm lined streets, blooming flowers, brightly colored birds – even in the heart of the dry season. While it didn’t have any famous churches or castles to recommend it, Bahir Dar was perhaps my favorite city. The bustling market provided an explosion of sights and smells; the lake breezes made sitting at a cafe or park on the shore a pleasure; wandering the streets we found our favorite plate of injera; and the sightseeing wasn’t too bad either – the Blue Nile Falls, lake monasteries, boat trips.

The Blue Nile Falls – used to comprable to Vic Falls until they installed a hydroelectric dam above. 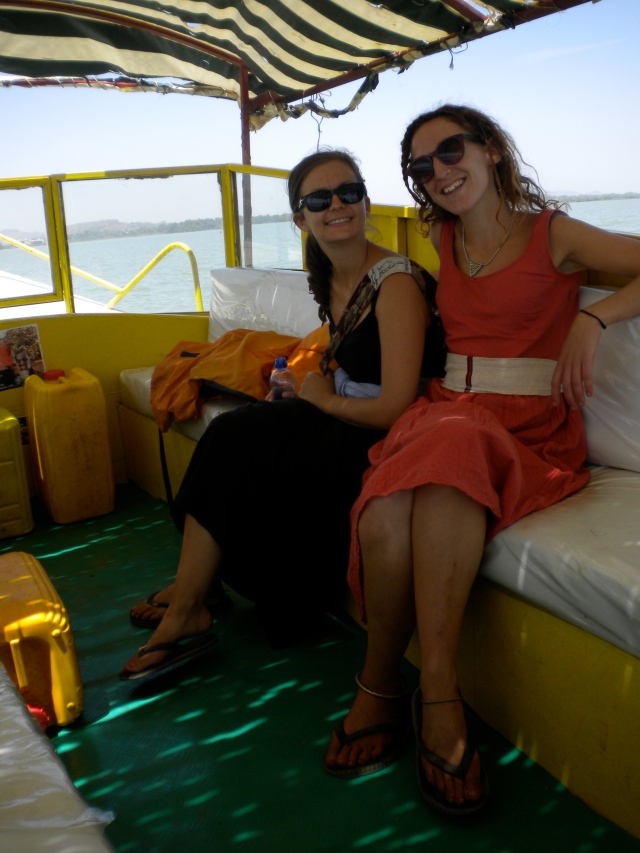 On a boat to the source of the Blue Nile! 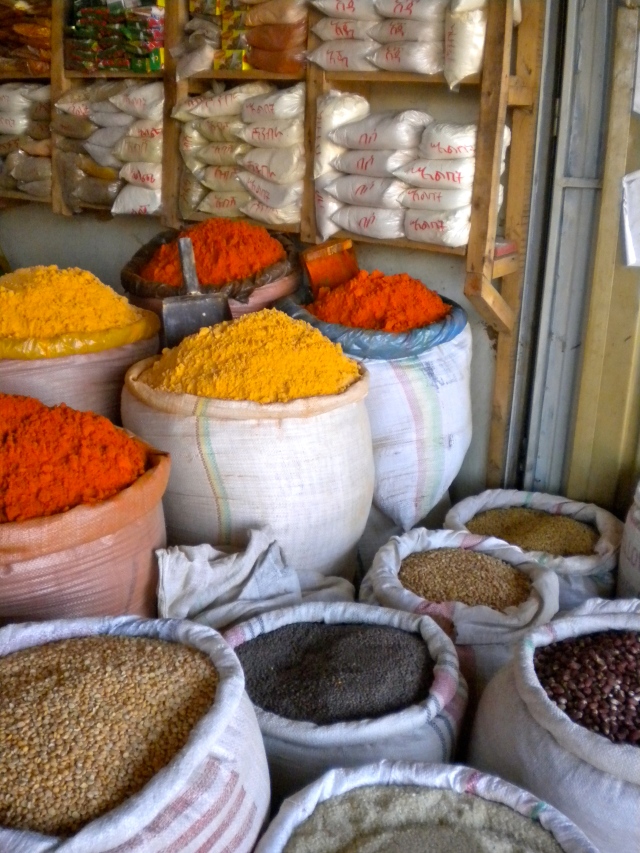 Shiro and birbir powders in the market

Though perhaps my favorite part of the whole trip was the tuk tuks that filled the streets. Just looking at them made me happy – for some reason they remind me of the Trooper. Perhaps not in size, but in spirit. 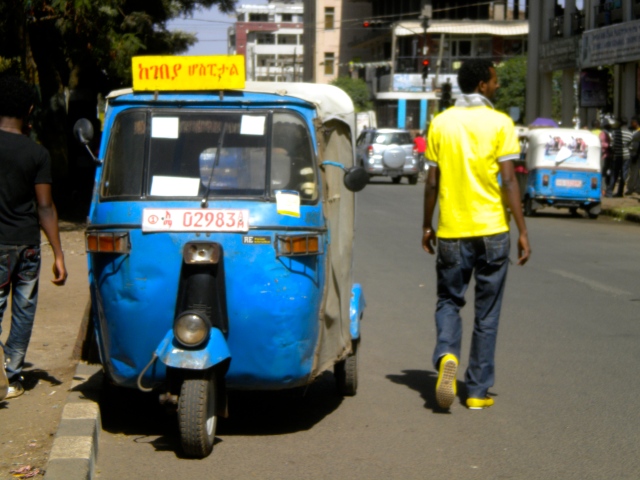 I took a lot of tuk tuk photos

Out-smarted by a chook

I admit it, I have been wrong. Well maybe just slightly wrong. Over the past year and a half living in Malawi, I have been outspoken in my dislike of chickens. I have refused to have anything to do with … Continue reading →

In case anyone out there missed it, last week the Guardian’s Global Development Professionals Network blog posted an article that I co-wrote with one of our volunteers, Jo Lewin.

The article presented permaculture as a possible solution to micronutrient deficiencies in Malawi, discussing some of the benefits and challenges. If you haven’t had a chance to read it, please check it out and pass it along!

For some reason, since coming back to Malawi from my trip home in January, I’ve had a hard time motivating myself to write anything for this blog. I keep putting it on my to do list, and then never quite … Continue reading →

The last week or so I was in the US people would frequently ask, “So, how do you feel about going back to Malawi?” My response was typically mixed. I loved being home, in the Bay Area. It felt right. … Continue reading →

The Scots Take Over Kusamala

Whew… It’s been a long month. I’m starting to feel a bit like a broken record, always talking about how busy I am. I don’t say complaining, because I enjoy the work, having things to do, and feeling productive. I … Continue reading →

A Reflection on Commercial Permaculture Gardening

This past week we hired one of our current interns to take over my position managing the commercial garden. It was a bittersweet moment for me, as I have thoroughly enjoyed the excuse it gave me to wander around outside … Continue reading →

It seems like most organizations, or some at least, have two… three… five… ten… fifty-year plans these days. One of our goals at Kusamala within the next few months is to go through a strategic planning process, which will include … Continue reading →

I recently returned to the farm after a two-week trip to Mozambique where a friend (Alison) and I decided to make a holiday out of our need to renew our Malawian visas. The places we went were so spectacular, and … Continue reading →

The Future of Permaculture in Malawi (according to me…)

The title of this blog post is a bit grandiose, I admit, but this is something that has been on my mind lately – especially as we’ve been pondering the future of this organization that has so captured my heart … Continue reading →